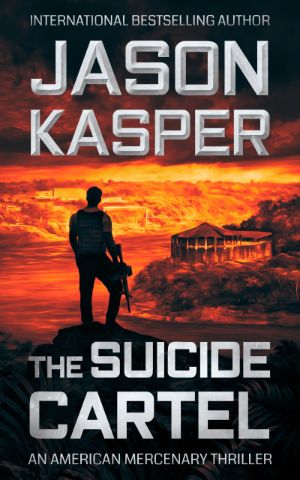 David Rivers wanted to lead his team in war.
What he got was a suicide mission…

David Rivers is no ordinary mercenary.

But the Triple Frontier region is deadly. Narcos and terrorists rule its remote jungle, and David must lead his team into the heart of danger.

Getting in is easy. Getting out might be impossible.

When a high-risk recon mission turns deadly, David’s team must fight for survival against overwhelming odds. Desperate and on the run, they use everything at their disposal just to stay alive.

But getting out will require something more… and if David doesn’t discover the truth behind his current mission, it will be his last.

The Suicide Cartel has you laughing and then forgetting to breathe on the same page.

Action packed with twists and turns that kept me glued — I couldn't put it down!

This book is heart-pounding, adrenaline-fueled, in-your-face, nonstop action — David Rivers is at his best!

This entire series is a must read. Especially this one!

Jason Kasper is right there with Tom Clancy and W.E.B. Griffin as far as authors go.

The evolution and changes to David's character, coupled with the ingenious integration of past characters and events, the breathtaking descriptions of the jungle, and the nonstop action of the military fights, all combine to make this book a definite must read!